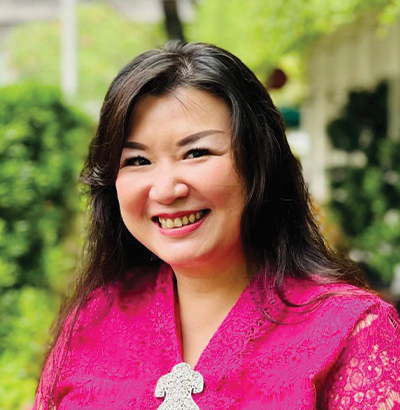 Pauline Suharno began her career with Elok Tour in 1997 as the commissioner and branch manager before being promoted to commissioner and director within the same company in 2011, a role she assumes till today.

With her deep experience in the travel industry, especially in the operational aspects, Pauline is keenly aware of the needs of travellers and industry members alike. Not only has she been actively involved with travel associations since 2008, she was also recently appointed as Secretary General for Indonesia Tourism Industry Board.

A regular speaker at international travel industry events, Pauline is also one of the key people behind the successful ASTINDO Travel Fair, which was first held in Jakarta in 2010 and has since grown to five editions across Jakarta, Surabaya, Palembang, Bali and Padang. During the Covid-19 pandemic, she and her team at ASTINDO have been continuously keeping up members' spirit by organising series of virtual travel marts, webinars, supported by various tourism boards.